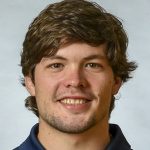 Two-time NCAA finalist Mitchell Port is in his second season at West Virginia University and was announced as an assistant coach on April 17, 2018.

The Bellefonte, Pennsylvania, native became a three-time All-American after reaching the finals for the second time in three years. Seeded second at the 2015 NCAA Division I Wrestling Championships, Port won his first four matches, including a 9-4 decision over No. 7 seed Anthony Ashnault of Rutgers in the quarterfinals and a 14-2 major decision over No. 11 seed Chris Mecate of Old Dominion in the semifinals. Port then dropped an 11-5 decision to top-seeded, four-time national champion Logan Stieber of Ohio State in the finals.

Port capped his senior campaign with a 36-2 record, posting 13 falls, two tech falls and nine major decisions. He won his fourth straight PSAC Championship along with a third EWL crown and picked up his second Midlands Championships title.

After redshirting his freshman year, Port enjoyed an outstanding first season as the starter at 141 pounds (2011-12). He ended the year with a 30-10 record, reaching the Round of 12 at the NCAA Championships. He also finished second at the EWL Championship and won his first PSAC crown.

Port’s second trip to Nationals resulted in a run to the title match after a 7-6 upset of top-seeded Hunter Stieber of Ohio State in the semifinals. However, Port suffered a 4-3 setback to No. 2 seed Kendric Maple of Oklahoma in the 141-pound championship match. He ended his redshirt sophomore season with a 34-4 record and was named the EWL and PSAC Wrestler of the Year. He also won his first EWL crown and second PSAC Championship.

In 2013-14, Port became a two-time All-American with a third-place finish at 141 pounds. He ended the year with a 32-1 record, notching 13 falls. He claimed his second EWL and third PSAC title, earning EWL Wrestler of the Year honors for the second time. He also won his first Midlands Championships crown.

Port graduated from Edinboro in 2015 with a bachelor’s degree in individualized studies.

In addition, Port was inducted into the Bellefonte High School Wrestling Hall of Fame on January 10, 2017. He is the winningest wrestler in Red Raider history with 156 career victories.