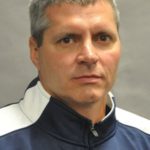 For 30 of the Lycoming College wrestling program’s 63 years, Hall of Famer Roger Crebs has meant one thing to the program – success.

A three-time MAC champion from 1984-86, Crebs was handpicked by the legendary Budd Whitehill when he ended a run of 37 years as head coach in 1993. It may have been one of the best decisions of Whitehill’s career.

From his first season, when he was recognized as the NCAA Division III Rookie Coach of the Year to 2012, when Crebs was inducted into the NWCA Division III Hall of Fame, he has kept his team in the center of the Division III national spotlight.

Along the way, Crebs has picked up 407 dual meet wins, coached 51 conference champions, 29 All-Americans and five national champions. He has also coached all seven of the school’s 100-match winners and he was inducted into both the District 4 Wrestling Hall of Fame in 2011 and the West Branch Valley Sports Hall of Fame in 2018.

In 2010, Crebs joined Whitehill as the first coaches in NCAA Division III history to win 300 dual meets at the same school. The pair are one of only three in the history of collegiate wrestling to have reached the mark, along with Minnesota’s Wally Johnson and J Robinson and Springfield College’s Doug Parker and Daryl Arroyo.

Crebs maintains a high level of excellence with his Warrior teams, with his teams compiling winning percentages of less than .600 just six times in 26 years as coach.

The 2018-19 season was another banner year for Lycoming wrestling, as the team finished 14-4 in dual meets. Seven grapplers placed the NCAA Southeast Regional, helping the team finish in second at the tournament, as three won titles and a fourth qualified for the NCAA Championships. At the championships, the team finished in 13th place thanks to the performance from Garrett Wesneski, who became Crebs’ fifth national champion and the school’s 10th. A record four Warriors earned NWCA Scholar All-American honors and Wesneski was named both the MAC Wrestler of the Year and the Southeast Regional’s Most Outstanding Wrestler.

In 2017-18, despite having new starters in six weight classes, the Warriors still enjoyed a 12-5 campaign. The group got stronger throughout the year, finishing fifth at the NCAA Southeast Regional, the highest-finish for the Warriors at a regional since 2007. Three Warriors qualified for the NCAA Championships, with Trevor Corl earning All-American honors at 149 pounds. The team also featured two NWCA Scholar All-American honors and the team earned its third NWCA Academic Top 30 finish in the last four years.

Crebs’ 2016-17 Warriors enjoyed one of the finest seasons his career, as the team posted an 18-3 dual meet record, finished third at the Budd Whitehill National Duals, won the RIT Invitational, its first tournament win in 12 years, and also hit a high-water mark by taking seventh at the NCAA Mideast Regional. Crebs also became the school’s all-time leader in coaching wins during the season, surpassing the mark of 376 set by Budd Whitehill from 1956-93. He helped coached the team to a 16th-place finish at the NCAA Championships behind a fourth-place finish from Seth Lansberry and a sixth-place finish from Nolan Barger. Barger was also named the MAC Scholar Athlete.

In 2015-16, Crebs led the Warriors back to the center of the national stage, as he led the team to a 13th-place finish at NCAA Division III Championships, the team’s best finish since 2000. He coached both Lansberry and Barger to All-American status, with Lansberry placing fourth at the tournament and Barger taking third. The Warriors also finished 14-7 in dual meets and reached as high as 23rd in the NWCA Coaches’ Poll. The team also made its mark in the classroom, where it set a new high-water mark with nine MAC Academic Honor Roll selections.

Crebs’ wrestlers turned in one of the most memorable campaigns in his tenure in 2014-15. The team finished 13-3 in dual meets and finished 21st at the NCAA Division III Championships. The Warriors also finished third at the Budd Whitehill National Duals which helped the squad enter the national rankings where it reached as high as 20th in the NWCA Coaches’ Poll. Barger had a remarkable run to a third-place finish and All-American status at the NCAA Division III Championships. He coached two NCAA Mideast Region champions and NCAA qualifiers.

In 2007-08, two Warriors qualified for the NCAA Championships, and Matt Miller, who finished fourth at the MAC Championships as a freshman, claimed an NCAA title at 197 pounds, finishing the year with a 21-0 record.

The Warriors have recorded six 20-win seasons in the program’s history, most recently in 2002-03, all under Crebs’ direction. Crebs’ 1996-97 squad recorded the program’s only undefeated season going 22-0. That year, the Warriors won the MAC and East Regional championships, the Budd Whitehill Division III National Duals title, and took seventh at the NCAA Division III National Championships, where three Warriors earned All-American honors.