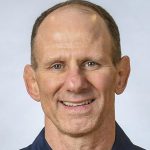 Tim Flynn is in his second season at the helm of the Mountaineers after being named the ninth head coach of the West Virginia University wrestling program in April of 2017.

Flynn’s vision to put the Mountaineers back on the national stage began the right way in 2018-19 as WVU sent five wrestlers to the 2019 NCAA Division I Wrestling Championships for the first time in five years (2014). Five Mountaineers also earned podium finishes at the 2019 Big 12 Wrestling Championship, which redshirt sophomore Matthew Schmitt advancing to the 133-pound semifinals.

The Mountaineers earned a 4-14 overall record in dual matches in 2018-19, with a 3-6 record in Big 12 matches. WVU earned its first win over a ranked opponent of Flynn’s tenure on Dec. 30, 2018, as the Mountaineers knocked off No. 20 North Dakota State at the South Beach Duals. The squad would go on to finish ninth at the 2019 Big 12 Wrestling Championship with 46 points.

Flynn comes to West Virginia from Edinboro, where he spent the past 21 years building the Fighting Scots into a wrestling powerhouse. He compiled a 223-95-5 career record at Edinboro to become the school’s all-time winningest coach and a member of its Hall of Fame.

Flynn engineered in recent years two of the best seasons in Edinboro wrestling history. His 2013-14 squad recorded a fifth-place finish at the national tournament with three All-Americans. The Fighting Scots ended the year with an 11-3 record, winning 10 of their last 11 duals including a 17-16 win over No. 6 Pitt. He received NWCA NCAA Division I Coach of the Year honors, shared InterMat Coach of the Year honors with Minnesota’s J Robinson and also was selected as WIN’s Dan Gable Coach of the Year. He followed in 2014-15 with four All-Americans and a third-place national finish – the school’s highest ever.

He was the Eastern Wrestling League (EWL) Coach of the Year seven times and the Pennsylvania State Athletic Conference (PSAC) Coach of the Year 13 times. Flynn also coached three national champions (John Koscheck at 174 in 2001, Gregor Gillespie at 149 in 2007 and Jarrod King at 165 in 2009) and eight NCAA runners-up.

Under the former Penn State All-American, Edinboro dominated eastern wrestling circles, winning the EWL Championship in 15 of the last 21 years, including eight straight years at one point, along with the PSAC tournament title 17 times in his 21 campaigns. At one point, Edinboro won 34 of 35 EWL dual matches, which included a 29-match winning streak.

Before taking over the head coaching duties, Flynn was an assistant at Edinboro under legendary coach and Olympian Bruce Baumgartner from 1992-97. Flynn assisted Baumgartner to a 56-21 record, including a 14-0 dual match mark and a sixth-place finish at Nationals in 1996.

Following three standout seasons at Vista High in Vista, California, Flynn moved east to finish his prep career at Annapolis Senior High in Annapolis, Maryland. He went on to enjoy a stellar career at Penn State, captaining the 1986-87 squad while earning All-American honors at 134 pounds. He went 30-10-1 as a senior, winning the EWL title and finishing seventh at Nationals. The Nittany Lions enjoyed one of their greatest seasons ever with an 18-1-1 record and a third-place finish at the NCAA Tournament.

Flynn finished with a 105-32-2 collegiate wrestling record, still ranking among the all-time career leaders in victories for Penn State. He also won the EWL title as a junior in 1986 while competing at 126 pounds, finishing with a 30-7-1 mark. He qualified for Nationals as a sophomore as well after finishing second at the EWL Championships. He was a four-time Midlands Championships place winner, a two-time Mat-Town USA champion and was an Espoir National freestyle runner-up in 1984.

Flynn, who is currently a member of the National Collegiate Wrestling Association (NWCA) Leadership Group, graduated from Penn State in 1987 with a bachelor’s degree in business management. He later earned his master’s degree in business administration from Penn State with a concentration in finance in 1990.  He and his wife, Tanya, have two children – Logan and Riley.